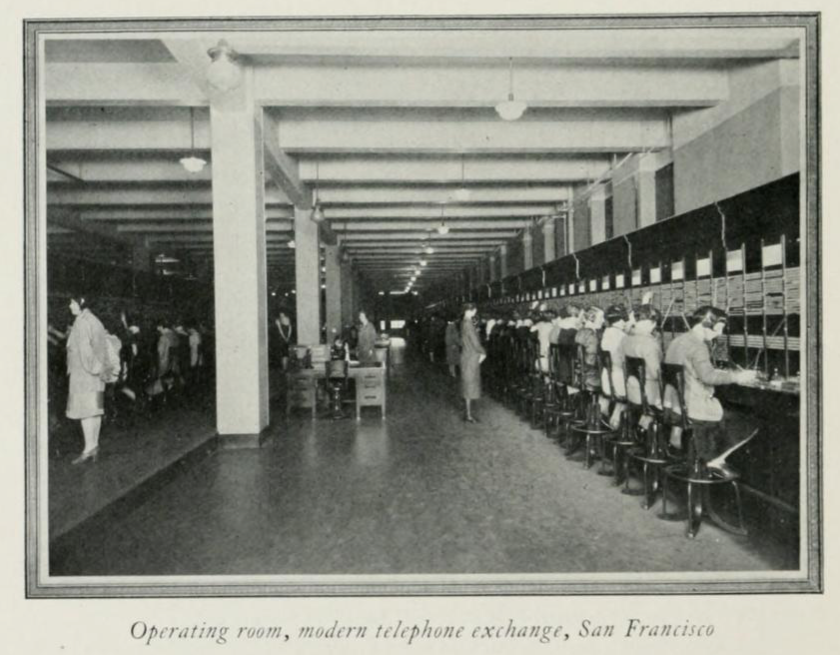 Eight Gracia sisters were born between 1901-1914, seven reaching adulthood, interspersed between four brothers. None of the sisters had reach the age of 18 by the time their father passed away on Armistice Day, 11 November 1918. From 1920 until the mid 1940’s six of the Gracia sisters worked as Telephone Operators and, of those, five worked for PacTel San Francisco. Hazel worked as an Operator at Western Union Telegraph Company.

The earliest telephones were not capable of dialing direct from one person to another. They required a telephone operator to physically connect wires on a central switchboard to connect the call. It was a revolutionary new technology, connecting people, and spread quickly to the masses.

By 1927 the Pacific Telephone and Telegraph Company (PacTel) employed 6,700 men and women in fifteen buildings across San Francisco, supporting 230,000 telephones in a city of 720,000 inhabitants. The number of telephones had doubled in the previous decade.

Despite the teenage boys’ dubious track record, Pacific Bell continued to employ them as night operators for several more years, believing that women would not want to work nights. But one night the company’s vice president, responding to numerous customer complaints about poor service, made an unannounced tour of inspection and found the boys curled up on the floor next to their switchboards, snoring away. “The boys were discharged and women were employed for night work,” the “Review” notes, adding, “Since that time telephone operating rooms have been considered to be as peculiarly a part of feminine domain as the home.”

A veteran operator told the San Francisco Examiner. “We are not allowed to speak even in a whisper to each other the nine hours we are on duty, much less smile, and to laugh out loud is the height of recklessness.” She said she’d once been forced to work 10 extra hours, without pay, for one brief giggle.

Companies often tried to control their operators’ personal lives, as well. “The unwritten rule was that she could not marry and would lose her job if she did,” noted Ellen Stern and Emily Gwathmey in their 1994 history, Once Upon a Telephone.

The Rise and Fall of Telephone Operators, Greg Daugherty, History.com

Judging by the careers of the Gracia sisters, it is clear that the unwritten rules were not always followed. Doris worked as an operator prior to her marriage and continued as a supervisor, even returning to the role after the birth of her first child. Similarly Hazel worked for Western Union as an operator for a decade after her marriage. The remaining four sisters followed a more traditional path becoming housewives once married.

Telephone technology evolved through the 1930’s, allowing users to simply direct dial another telephone without the operators assistance. Thousands of operators lost their jobs and the number of telephone operators has been in decline ever since.