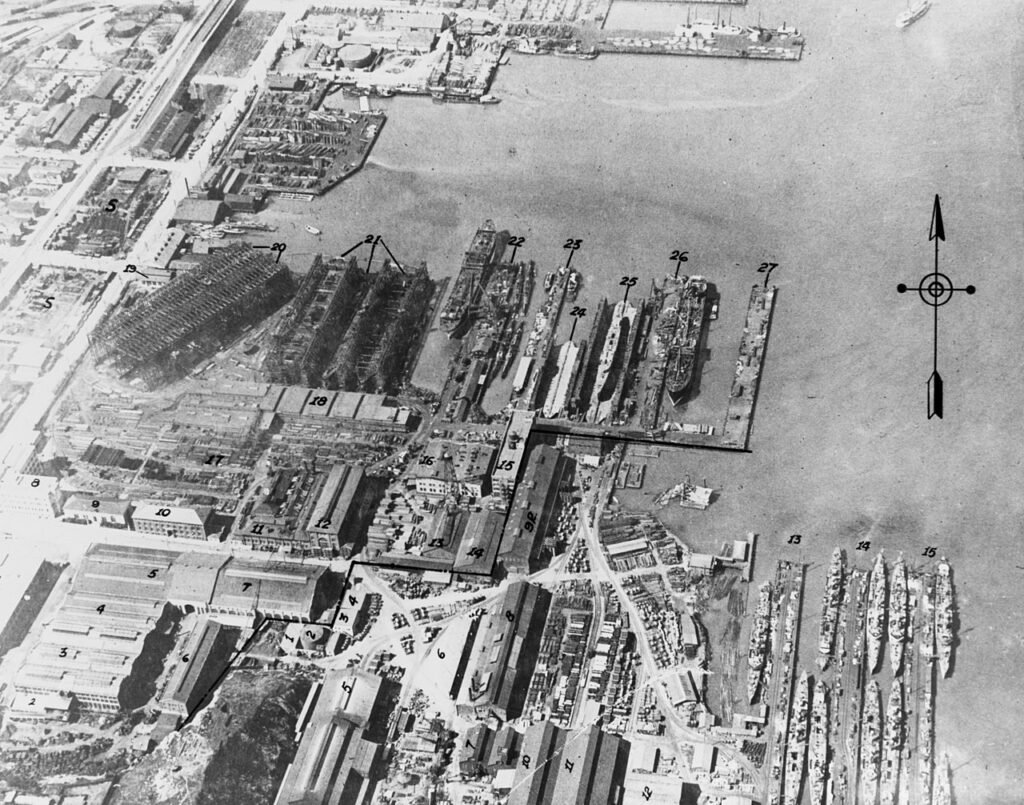 The Gracia family of San Francisco all followed a common path in their occupations. Three out of four brothers became metal workers and six out of seven sisters became telephone operators. Their father, Emile Vincent GRACIA (1877-1918) died aged 41 from colon cancer, leaving his widow Frances with nine children under 18 years of age. The two elder sons shouldered the burden with Frank returning from Los Angeles to support the family.

Joseph Emile GRACIA (1899-1987) and his brother Frank John Gracia (1900-1944) both found work at the Bethlehem Shipbuilding Corp, Union Iron Works, in San Francisco. In 1916, the US Congress authorized a massive three-year shipbuilding program, with the aim of matching the largest navy in the world, the British Royal Navy. In addition to the cargo ships, tankers, ferries, and tugs, the shipyard delivered 84 military vessels between 1918-1924:

Curiously enough many of the Wickes-class & Clemson-class destroyers were transferred to the British Royal Navy in 1940 under terms of the destroyers-in-exchange-for-bases agreement. Fifty destroyers were supplied in total to the overwhelmed Commonwealth Navies battling the Axis powers.

Joseph started as an assistant in 1918, moving up to Chipper and Caulker. In the 1920’s ship’s hulls were still riveted together and to ensure they were watertight the caulker would close down the edges of the plates and the heads of the rivets to form a metal to metal watertight joint.

Frank started as Holder On, part of the riveting team, who worked opposite the Riveter to keep the red hot rivet in place while the riveter compressed the heads with use of a pneumatic gun.

As the rivet cools and shrinks, the two metal plates and drawn even more tightly together. The riveting team would be followed by the chipper and caulker.

By 1918 the shipyard employed 10,000 workers. If you included the Bethlehem Shipyards in Alameda and Hunter’s Point, the total labor force was 25,000.

It was hard to find craftsmen with the skills to produce steel ships in a place where it had never been done before. [Shipyard owner] Irving M Scott said he never recruited machinists and other skilled workers from abroad, but many qualified shipyard workers found their way to his shipyard, from Scotland, Ireland, England, Germany, and elsewhere. And Scott created an apprenticeship program that employed young boys for four years at low wages in return for the promise of learning a skilled trade. The rules stated the boys must be 16, but many were probably younger…

…Working conditions were tough for industrial workers in the 19th and early 20th century, at the Union Iron Works shipyard as at other plants. Sixty hour weeks were the norm. Unionization was resisted fiercely by management. Pay was a little better at Union Iron Works than at most east coast yards because of the shortage of qualified workers. Management encouraged loyalty through sponsorship of athletic and social activities.

By 1940 Joseph, aged 40, had joined the San Francisco Police Department, working as hostler caring for the the department’s horses. Frank left the shipyard in his late 20’s in the late 1920’s and joined San Francisco’s Fire Department, initially as a hoseman but ultimately as ladder man. The third son, Ernest, remained in sheetmetal, returning to ACE Sheet Metal Works after serving with the US Army for the duration of WWII. The fourth and youngest son, Ramon, started in shower door installation, moved to industrial plating, and onto painting solutions in the late 1940’s.