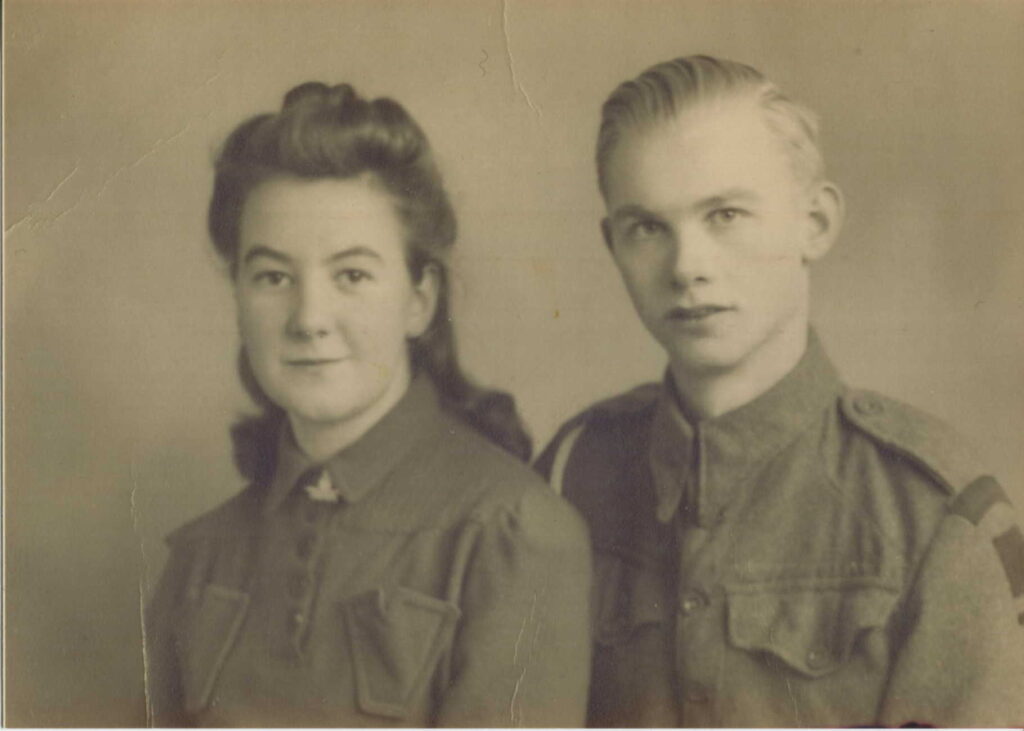 Albert Wear Clark aka Nobby Clark was born 1921 in Darlington, County Durham, the third of nine siblings born to a steel worker and worsted cotton spinner. Nobby followed in his father’s footsteps as a labourer in the steelworks.

As with many large working class families Nobby joined the Territorial Army after leaving school. The opportunity for extra income and a break from the day to day monotony was a common choice. However, his family had served their country, in uniform, for generations. Two paternal uncles, along with many cousins, had served during WWI. His name sake, Albert Wear Clark served until the 1920’s, and David Sawers Clark, who served with the Seaforth Highlanders, lost his life after serving in France.

A clerk would deal with the common people but would be better educated, better paid and in a position of relative power. To the uneducated, clerks were posh and therefore considered to be “nobs”. Hence, nobby Clark.

Nobby enlisted, aged 17 years, November 1938, attesting to four years with the 1/5th Battalion, Durham Light Infantry, with the knowledge that conflict was imminent and his Territorial unit would be mobilized upon the outbreak of war. Assigned to the severely under equipped 54th Searchlight Regiment, Nobby was first stationed in Stockton-on-Tees, countering multiple raids from the Luftwaffe targeting the factories and shipyards on Teeside during the early months of the war.

Through no fault of its own the 54th Searchlight Regiment was fated to have a comparatively uninteresting war. By the time war was declared in September 1939, Nobby’s 413 Battery had deployed at Filey, 411 Battery at Malton and 412 Battery at Easingwold with Regimental Headquarters. Equipment was critically short at the outbreak of war. Luckily, the months of the Phoney War that followed mobilisation allowed AA Command to address its equipment shortages.

The Filey Coastal battery was an emergency battery commissioned by Northern Command and consisted of two 6-inch naval guns. Between the two gun pits was a generator house with a range finder above and behind it. The searchlights were on the lower cliff and their foundations can now be seen on the beach. The guns and searchlights were surrounded by barbed wire. The battery is now only visible as crop marks in a grass field and by broken concrete pushed over the cliff at the Primrose Valley Caravan Camp.

The winter of 1939 was bitterly cold and the men were on isolated and exposed sites in the Yorkshire Wolds. The Regiment underwent special infantry training to prepare and defend against any type of German attack along the Yorkshire coast. This included making all the sites mobile and even involved supplying some of them with taxis. German air raids began in the summer and autumn of 1940 and the troop site at Flamborough Head was one of the first to be bombed. This was followed by the troop site at Reighton, which was several miles inland. The Regiment destroyed several German bombers during the Battle of Britain.

It was during this period that Nobby met his future wife at a dancehall in Bridlington, 10 miles south of Filey. Sheila remembers cycling for an hour up the hill from Bridlington to meet him at the searchlights one evening before she joined the Land Army.

The next two years were spent on the Yorkshire coast as the Searchlight Batteries were re-equipped with Searchlight Control Radar (SLC) aka ‘Elsie’. The effect of using SLC was dramatic; in 1939 a searchlight had about a 1% chance of tracking a target, while with SLC this improved to 90%.

Nobby received promotion to Lance-Bombardier Clark in November 1942 but ten weeks later Nobby requested demotion back to Gunner. No reason is noted. After a quiet year on the coast Nobby was posted to F Battery Searchlights, Woolwich Arsenal in London, 6 December 1943, in transit to his first overseas posting.

Gibraltar had been a pivotal point of allied defense in the early years of the war, bombed by Vichy French forces, threatened by Spain and Germany, and attacked by the Italians. If the gateway to the Meditteranean fell to the Axis powers all Allied shipping to Asia would be blocked from accessing the Suez Canal and forced to travel around Africa. However, with the surrender of Italy in 1943, the threat to Gibraltar was limited and evacuees were soon being re-patriated from the UK and Madeira.

Arriving in Gibraltar on Christmas Eve 1943, after two weeks in transit, Nobby was assigned to 3rd Searchlights in the 15th Anti Aircraft Brigade. The brigade, formed to combat the Axis threats in the early part of the war, was being wound down due to the reduction of raids by the Luftwaffe. The brigade was slowly placed into an effective suspended animation, and ultimately disbanded.

In September 1944 Nobby was admitted to hospital for almost a month. Sheila recounted two family stories of Nobby’s war time injuries: firstly he was shot in the ankle while working as a messenger runner; secondly a serious bout of malaria. Neither is referenced in the casualty report.

Nobby qualified for a new scheme in 1945, LIAP, allowing any person who would have served overseas for three years to be given a short home leave before being demobilised. This allowed Nobby to return to England prior to redeployment to Italy, 26 May 1945.

Stationed with the Royal Artillery (Searchlights) attached to the Divisional Headquarters for the XIII Corps in Italy, Nobby arrived shortly after the spring offensive, codenamed Operation Grapeshot. This final Allied operation of the Italian Campaign, in the final stages of the war, ended 2 May 1945 with the surrender of German forces in Italy.

Gunner Albert W Clark was assigned to the officers mess at HQ serving with the occupying Commonwealth Military Forces. After a year in Italy Nobby returned to serve on the home front, 17 May 1946, transferred to reserves, 11 August 1946, then demobilized.

Gunner Albert Wear Clark was on active service for the duration of WWII. Totaling almost seven years and three countries, with the Royal Artillery (Searchlights), somehow he managed to arrive just after the Axis surrendered in both Gibraltar and Italy, and survived to come home to his family. The service medals he earned were mailed to his family address at 175 Eldon Street, Darlington, but according to Sheila “they were returned as he had served his country and that did not merit medals.”

Post war, Nobby found work at the Royal Ordnance Factory in Thorp Arch, married Sheila Hudson in Bridlington, April 1947, relocated to York, and continued to serve with the Civil Defence Corp along with his wife and children.