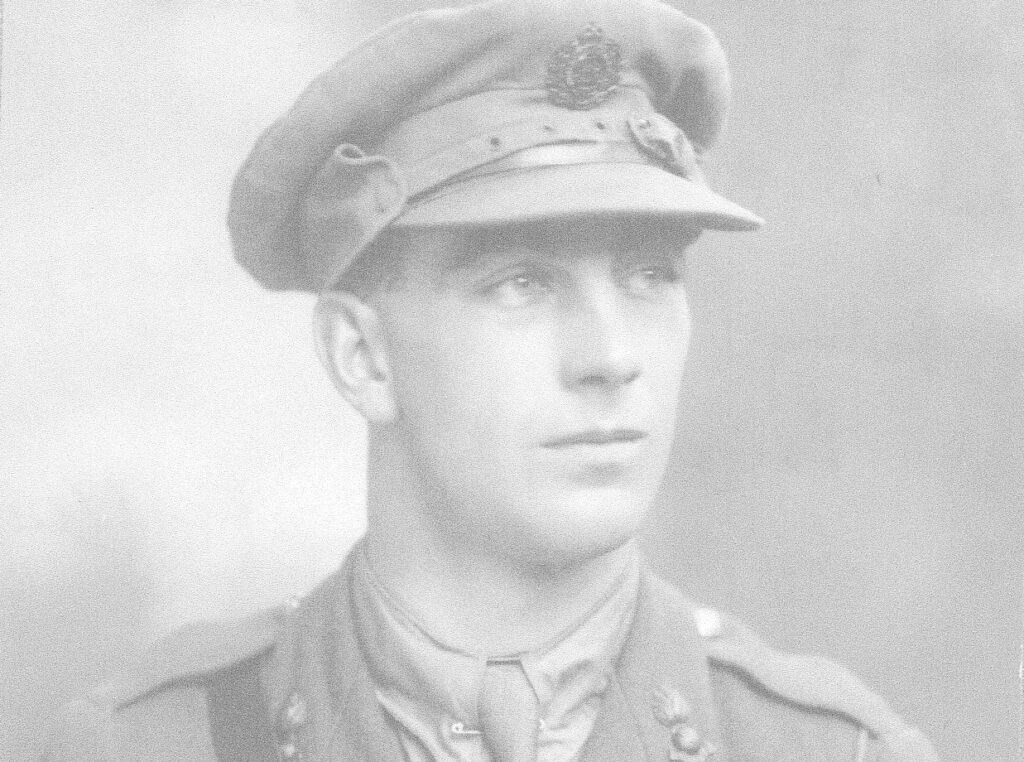 Wilfrid Hudson was born and raised in Bridlington, by Jane and Joseph Henry Hudson, who ran a building firm in the town. After studying civil engineering he joined the Bridlington Corporation as an assistant borough surveyor.

In September 1914, Wilfrid followed his elder brother, Bernard, into the Territorial Force (TF), East Riding of Yorkshire Yeomanry, shortly after they had been mobilized at the outbreak of war.

TF was intended to be a home defence force for service during wartime and members could not be compelled to serve outside the country. However, after the outbreak of war, TF units were invited to volunteer for ‘Imperial Service‘.

Wilfrid’s attestation with the Yeomanry was for one year, but he was discharged less than five months later in February 1915, having been granted an officers commission. 2nd Lieutenant Wilfrid Hudson received his commission 10 July 1915 with No. 1 Company, East Riding (Fortress) Engineers.

The East Riding (Fortress) Royal Engineers was a volunteer unit of Britain’s Royal Engineers formed for the defence of the Humber Estuary in the East Riding of Yorkshire. On the outbreak of the First World War, the TF was mobilised and the fortress engineers took up their war stations in the North Eastern Coast Defences.

Although the East Coast was attacked by the German High Seas Fleet on 16 December 1914 (the Raid on Scarborough, Hartlepool and Whitby) and again on 24 April 1916 (the Bombardment of Yarmouth and Lowestoft), and was regularly bombed by Zeppelin airships, the fortress engineers were nevertheless able to release 1st Line men to provide 1/1st East Riding Field Company, Royal Engineers, for active service. After field training the company would be shipped to Ypres on the Western Front.

The Ypres salient was the battlefield selected by the German Army for mass use of their formidable new chemical weapon, poison gas. The salient (a piece of land or section of fortification that juts out to form an angle) followed the canal, bulging eastward around the town. North of the salient, the Belgian army held the line of the Yser and the north end of the salient was held by two French divisions. The eastern part of the salient was defended by the Canadian and two British divisions.

The Second Battle of Ypres was fought from 22 April – 25 May 1915 for control of the strategic Flemish town of Ypres in western Belgium. At the end of the battle the Allied forces had withdrawn three miles closer to Ypres. The city, bombarded by artillery fire, was demolished.

Although poison gas had been used on the Eastern Front, it surprised the Allies and about 7,000 gas casualties were transported in field ambulances and treated in casualty clearing stations.

The poem ‘In Flanders Fields’ was written during the battle by John McCrae, a soldier, physician and poet. Having witnessed the gas attacks first hand and buried a close friend killed during the battle, McCrae noted how poppies quickly grew around the graves of those who died at Ypres. He composed the poem while sitting in the back of an ambulance at an Advanced Dressing Station outside Ypres.

In Flanders Fields, the poppies blow
Between the crosses, row on row,
That mark our place; and in the sky
The larks, still bravely singing, fly
Scarce heard amid the guns below.

We are the dead. Short days ago
We lived, felt dawn, saw sunset glow,
Loved and were loved, and now we lie,
In Flanders fields.

Take up our quarrel with the foe:
To you from failing hands we throw
The torch; be yours to hold it high.
If ye break faith with us who die
We shall not sleep, though poppies grow
In Flanders fields.

This hellscape was the destination for the newly promoted 2nd Lieutenant Wilfrid Hudson. The 1/1st East Riding Field Company, (Fortress) Engineers, embarked for France on 17 September 1915. Three days later they joined the Regular 3rd Division serving with the British Expeditionary Force (BEF) on the Western Front.

Wilfrid survived the battle and continued to serve at front through the winter of 1915–1916 in the Ypres Salient. From 1-22 January 1916 the East Riding of Yorkshire Company was engaged in “repairing, maintaining and constructing trenches, laying down lines, hutting parties, military and civilians constructing camps, horse standings. The Royal Engineers and Infantry were erecting and fitting new saw mill, making road, and draining ground.”

In the meantime the mining engineers from both sides had been attempting to undermine their enemies positions. On the 23 January, as work carried on above ground, the “Germans explode large mine just in front of BLUFF trenches. Landslide follows completely destroying trenches and burying occupants from edge of BLUFF to canal.”

On 24 January, while attempting to repair the damage, Wilfrid was wounded. He was evacuated from the trenches with a serious abdominal bullet wound and operated upon at Casualty Clearing Station No. 10. The doctor had hopes of a recovery.

For his war service Wilfrid was awarded the Victory Medal, British War Medal, & 1914-1915 Star. The obituary was printed in The Chronicle.

We very deeply regret to announce the death of Second-Lieutenant Wilfrid Hudson, which took place on Tuesday, February 8th. This sad news was received by Mr. and Mrs. Hudson, in a telegram received on Thursday, as follows:–

It is unnecessary to state that this painful news is a terrible blow to the parents of this brave young officer, and Mr. and Mrs. J. H. Hudson, in their great grief, will have the warmest sympathy of a host of friends. It is in no mere formal manner we express our regret at the death of Lieut. Hudson; he was known and esteemed as a young engineer and surveyor of more than average ability, and was admired for his quiet and unassuming manner and his unfailing courtesy. But it is those at home who really know the worth of such a son, and we can not estimate the loss sustained by Mr. & Mrs. Hudson and their family.

As stated in our last issue, Lieutenant W. Hudson was very severely wounded in France, and had been operated upon at the hospital. He had gone through the terrible ordeal with courage and patience, and the hope was entertained of his ultimate recovery. There can be no doubt, from the very kindly letters received by his parents, and written by one of the Army Chaplains, that everything possible was done to save his life. But all efforts were in vain, and he died as stated on Tuesday, February 8th.

The toll of the war, so far as Bridlington is concerned, has been very heavy, and the staff of the Bridlington Corporation has suffered very severely, no fewer than three young men employed at the Town Hall having laid down their lives for their King and country, namely, Private G. Berriman, of the Town Clerk’s staff; Lieut. Stuart Lambert, and Lieut. W. Hudson, both of the Surveyor’s Office.