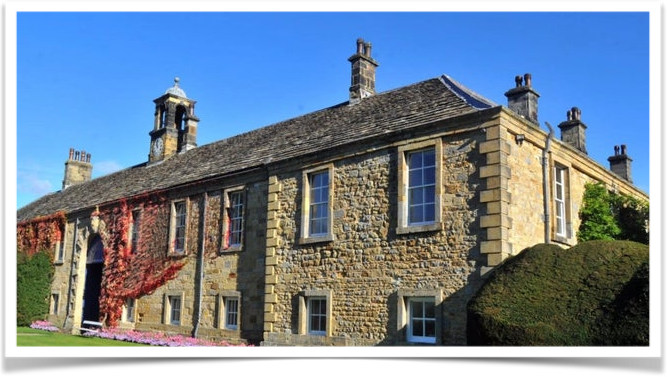 John Bainbridge was born in the village of Oulston in 1789 to parents John Bainbridge & Mary née Wright. The baptism was held two miles away at Saint Michael & All Angels Church in Coxwold, where his parents had married three years earlier. The church would be favored by the family for generations to come.

Coxwold was at one time a market town, and, though in the early 18th century the market had been ‘long disused,’ some of the dignity of a town still lingered.

John and his family moved to Squirrel Cottage, Oulston, in 1796, a newly refurbished stone cottage with a thatched roof, opposite a well in the green, at the heart of the village.  It still stands today, extended, split into two properties, and re-roofed.

Oulston sits at the junction of two Roman roads, with the remains of a Roman villa nearby. The village was part of a large estate centered on Newburgh Priory, between Oulston and Coxwold. It was the seat of the Earls of Fauconberg, at this time, Henry Belasyse, 2nd Earl Fauconberg, Lord of the Bedchamber, Custos Rotulorum “Keeper of the Rolls” and Lord Lieutenant of the North Riding of Yorkshire. As Fauconberg had no sons, his earldom became extinct upon his death in 1802, and the estate passed to his daughter Lady Anne Belasyse and her husband, Sir George Wombwell, 2nd Baronet, and a first class cricketer playing for the MCC.

Tenant farmers, like John, would pay rent to the Newburgh Priory Estate whilst farming in Oulston. John’s father, John Bainbridge, was also a tenant farmer of 40 acres 30 perches of land in Oulston. John’s descendants would farm for the same landlords in Tollerton, Easingwold, Huby, & Sutton on the Forest.

John married Mary Bainbridge, May 1816, in Wath parish church, returning to live in Oulston, before buying a farm in Tollerton, where they settled to raise a growing family.

The 1817 land purchase in Tollerton lists John Bainbridge of Oulston in the County of York Yeoman… which means “a commoner who cultivates his own land” in the early 19th century. The memorial, a written record of the transaction, lists the four parties involved in assembling multiple fragments of land totaling 80 acres.

What would appear to be a dire time to make a large investment appears to have been a wise decision as farming evolved dramatically in the post Napoleonic era. During the ‘High Farming‘ years of the 1840’s to 1870’s, farming practices became more intensive. No longer reliant upon ‘closed circuit’ farm-produced feeds and manures, farmers were able to leverage imported fertilizers and feeds. These changes arose from the steady increase of meat and dairy prices, alongside the increasing urban population’s demands, driving land owners to increase productivity.

John Bainbridge continued to work on the farm until his untimely death at the age of 80. Tragically on the morning of August 16th, 1869, the Newcastle Express bound for York, struck and killed John whilst crossing the tracks at Tollerton. Press accounts vary on details but John appears to have been leading a farm wagon across the tracks when the express train struck him, rapidly followed by the coal tender, which ran over his arm.

Read more about John’s wife Mary Bainbridge and their children.