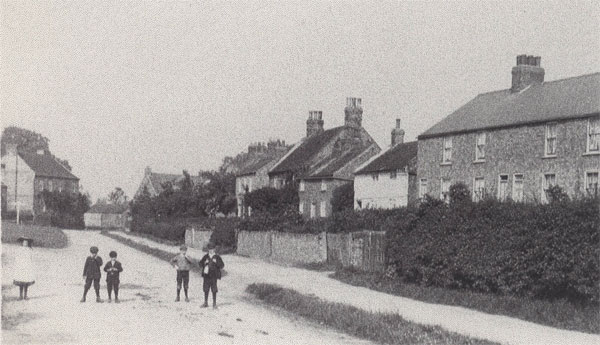 Henry Bainbridge was born 1831 in Tollerton, was sixth and youngest child of John Bainbridge & Mary Bainbridge. Raised in Tollerton, Henry followed in his father’s footsteps and aged 18, joined his elder brother Joseph as an agricultural labourer living with, and working for, the Sadler family, farmers in Tollerton.

During the Georgian era, the process of enclosure created a landless working class that provided the labour required in the new industries developing in the north of England. For example: “In agriculture the years between 1760 and 1820 are the years of wholesale enclosure in which, in village after village, common rights are lost.” E. P. Thompson argues that “Enclosure (when all the sophistications are allowed for) was a plain enough case of class robbery.”

Enclosures were by means of local acts of Parliament, called the Inclosure Acts. These parliamentary enclosures consolidated strips in the open fields into more cohesive units, and enclosed much of the remaining pasture commons or wastes. Parliamentary enclosures usually provided commoners with some other land in compensation for the loss of common rights, although often of poor quality and much smaller. Enclosure consisted of exchange in land, and an extinguishing of common rights. This allowed farmers consolidated and fenced off plots of land, in contrast to multiple small strips spread out and separated.

Enclosure faced a great deal of popular resistance because of its effects on the household economies of smallholders and landless labourers. Common rights had included not just the right of cattle or sheep grazing, but also the grazing of geese, foraging for pigs, gleaning, berrying, and fuel gathering. During the period of parliamentary enclosure, employment in agriculture did not fall, but failed to keep pace with the growing population. Consequently, large numbers of people left rural areas to move into the cities where they became labourers in the Industrial Revolution. Thus in a real way the English Parliament, seeking to increase profits on farm land also created the workers needed to increase the rapid expansion of the factory work force, by forcing people out of the surround county into cities.

Many landowners became rich through the enclosure of the commons, while many ordinary folk had a centuries-old right taken away. Between Lord Fauconberg, lord of the manor, Laurence Sterne, the vicar of the parish, and Philip Harland of Sutton Hall, they secured the inclosure of the common fields of Sutton on the Forest. The only common land left was a small moor south-east of a house called the Manor House which stands near the village. The village past from Lord Fauconberg of Newburgh to the Harland family in the early 19th Century.

An anonymous protest poem from the 17th century summed up the anti-enclosure feeling, and has been repeated in many variants since, even being applied to the contemporary privatization of the internet.

As a member of landless labouring class, Henry left the village of Tollerton and moved to Goodramgate in the City of York. Within eight years Henry, a farmer’s son, is marrying a farmer’s daughter, and lists his occupation as Gentleman. By the mid-nineteenth century there are two definitions of a gentleman. The first definition is that of head domestic servant such as head doorman or butler. In this situation I would, however unlikely, prefer to opt for the second:

Henry Bainbridge, Gentleman, married Jane Scott, a farmer’s daughter from Sutton on the Forest, in the Holy Trinity Church, Goodramgate in the summer of 1858. Judging by the X mark signatures, neither would appear to be literate.

The young couple started their family in Sutton Grange, Sutton on the Forest, where Henry returned to working as a farm labourer. One of Jane’s ten siblings, George Scott, was their neighbour and Farm Bailiff, and we must assume the family connection enabled Henry to find work. The bailiff was an overseer appointed by the estate owner to direct and superintend the farming operations. His main task was to oversee tenant farmers, making sure that rent was paid and farms were well looked after.

By the time of the 1871 Census, all but one of Henry’s siblings and their families were living in Tollerton. The 40 year old Henry was working as an agricultural labourer, living with three of four children, and tragically, a terminally ill wife. Their son Charles, age 10, was living with his grandmother Mary Bainbridge, also in Tollerton.

Henry was widowed in April 1872 and left to raise four children aged 5 — 14 years. Within three short years Henry had lost both parents, his wife, and eldest brother, John.

Henry remained in Tollerton, next door to his siblings, working as an agricultural labourer, as each of his children left to marry and raise their own families. Ada, his youngest daughter, remained with Henry, working as a dressmaker, until his passing in 1891. Henry is buried in Alne Churchyard along with his sister Elizabeth and brother Charles.

Read more about his wife Jane Scott and their children.